Breanna’s life has been filled with violence, abuse, drugs and alcohol since she was a child. Her mom died of melanoma when Breanna was just seven. She doesn’t really remember her mom. Instead, she remembers trips to the hospital and being abused by her stepdad. After her mom died, Breanna lived with her stepdad, who continued to abuse and neglect her. “I was always hungry and there was never any food in the house. And I had to wear my stepbrother’s clothes to school because I didn’t have any clothes of my own,” Breanna says.

At age nine, Breanna was taken from her stepfather’s care and placed at the Orangewood Children and Family Center. She was then placed with an uncle who was a drug addict and an alcoholic, and ended up back in foster care at age 13. As a teenager, she lived on the streets. She went to seven different high schools and dropped out in the 10th grade. When she turned 18 and was released from the foster care system, Breanna met a man and things moved very quickly. “I just wanted a normal life,” she explains. “I wanted to be loved.” Breanna got married at age 19, had two children in the next few years, and was divorced by age 23. Her next relationship, with a man she met online, was an abusive one. They had a child together, and Breanna stayed with him for four years. Eventually, Breanna’s children were taken from her by Child Protective Services.

When she got pregnant with her fourth child, Breanna realized she couldn’t live this way any longer. She moved into a homeless shelter for pregnant women and worked diligently to turn her life around. She regained 50% legal custody of her two older children, graduated from high school, and got a paralegal certificate from Irvine Valley College. But once she had her fourth child, she could no longer stay at the shelter. “I found myself facing homelessness again,” she says, “this time with my kids.” Although she thought she might be too old to qualify for Orangewood’s programs, she called anyway, and told us her story.

Today Breanna is living in one of our Rising Tide transitional housing apartments and is attending a local community college. She is three years sober, and is working towards her dream of becoming a lawyer. She has recently been accepted as a Peer Mentor and is looking forward to giving back to teens in the foster care system. When asked to describe Orangewood Foundation in one word, she immediately says, “Hope.” She expands, “When I was younger, I ran from help. But the need for help for foster youth doesn’t always have a time limit. Now, because of Orangewood, I’m serious about creating a future for my children and myself. I’m set up for success.”

Photos from the 2016 Orangewood Ambassador Luncheon are below! 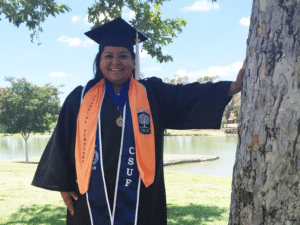