Make the holidays special for youth

Assemble back to school supplies 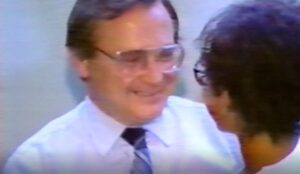 It is with heavy hearts and deep sadness that we mourn the passing of Orangewood’s beloved founding Executive Director, William Steiner. He passed away on Thursday, December 15, on his way to New York to see his grandson. He was 85.

Bill’s generosity and fierce dedication to Orangewood Foundation and our youth was limitless. For Bill, Orangewood was an actual dream come to life. His vision of a home for children in Orange County was an innovation that set in motion Orangewood’s history.

In 1978, he was the newly appointed director of what was then Orange County’s shelter for abused and neglected children, the Albert Sitton Home. On day one, he saw a problem that needed a solution: the home was woefully underfunded and under-resourced, serving over 1,000 children each year but with so few beds that some children slept on the floor.

He got to work and spent two years tirelessly advocating for more resources. In 1981, he met General William Lyon, who became Orangewood’s founding Board Chairman, and together, they recruited others to form the first Board of Directors for Orangewood Foundation. Orangewood was charged with building a new home that could meet the needs of Orange County’s children. Together, Bill Steiner and William Lyon raised millions of dollars, and Bill became the architect of the County’s first public-private partnership to build a brand-new, innovative, one-of-its-kind children’s home. The Orangewood Children’s Home opened in 1985 and remains open and serving children to this day. Bill would later take the Orangewood Children’s Home model to communities across California seeking innovative solutions within the child welfare system.

Bill ran the Children’s Home until the Orangewood Board came back to him and asked him, “What else can we do?”

“I was amazed that the Board wanted to keep going,” he recently told us. Bill agreed to join Orangewood Foundation as its first Executive Director. Under his vision, Orangewood became a leader in helping youth transition out of foster care and into independent adulthood. He touched the lives of thousands of young people in Orange County.

In 2019, Orangewood Foundation honored Bill Steiner with our General William Lyon Crystal Vision Award. In October 2022, Bill attended our Ambassador Luncheon and watched with amazement and tears in his eyes the legacy of his work unfold across our Innovation Stations, all beginning with his dream of the Orangewood Children’s Home.

“After Orangewood was constructed, it was recognized that there was more to the Orangewood story than brick and mortar. Most of the Board Members re-enlisted,” Bill said. “The rest is history in terms of what the Foundation has achieved.”

Thank you, Bill, for your heart of service to our community and to the children and youth of Orange County. Your spirit sparked a legacy of innovation that we will continue into the future. You remain the soul of Orangewood Foundation. In loving memory.